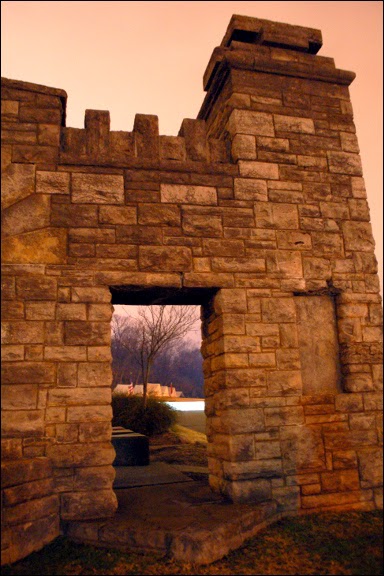 This past weekend, Pvt. Baconator (that is Malc's reenacting name) and I (Amish Todd . . . the Brits call me Moonshine Todd) joined the rest of the 9th Ky for an event commemorating the 150th anniversary of the Battle of Nashville.  A number of historic sites in and around Nashville participated in this sesquicentennial remembrance with the 9th were stationed at Fort Negley (which was the largest inland fort built during the Civil War).  Our weekend was fairly low-key . . . doing drills and a few firing demos, but mostly just interacting with the public in the camp.  The above photo is of our encampment framed by the substantial entrance gate at the Ft. Negley Park.  It was taken after all the others had turned in for the night.  I was up because one of my favorite joys of reenacting is being allowed on a historical site after dark. 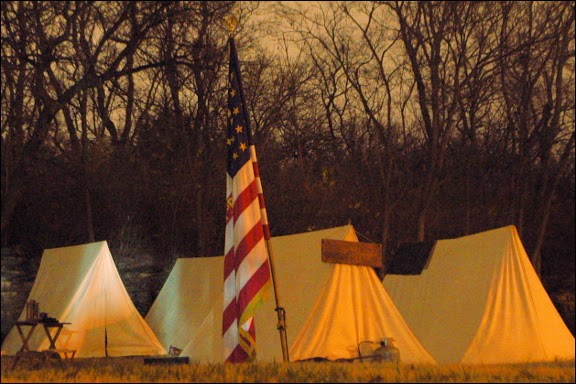 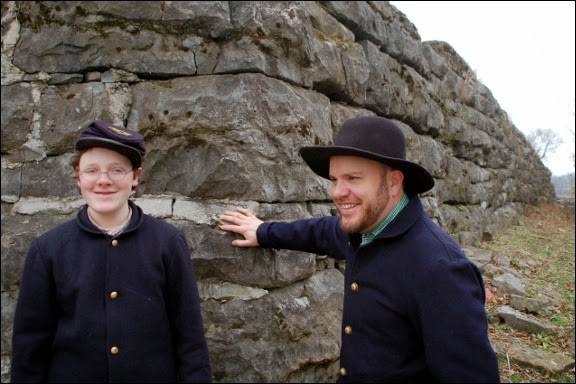 Baconator and Critter up at the fort pondering my musings about the Roman emperor Pupienus Maximus.  Well, this was the last of the significant 150th events for our area.  We will be doing Bentonville early next year, which will be the last of the 150th events for the western theater and then, I imagine, will die down.
Posted by Merkin J. Pus-Tart at 8:21 AM No comments: 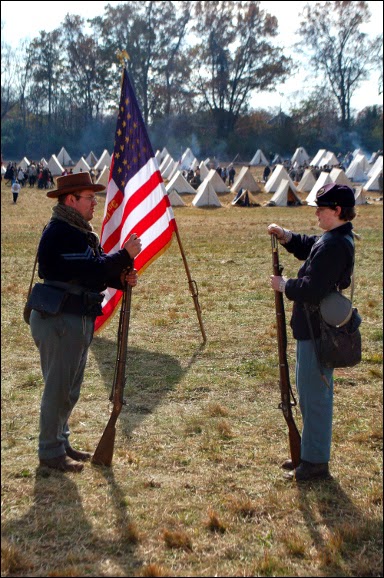 This weekend, Malc and I joined a good many of the 9th Ky for the 150th Battle of Franklin.  It was an especially notable event for Malc, as he was able to fully participate in a reenactment for the first time.  No more just a runner . . . he marched, and fired just like everyone else.  Here is Malc and Kyle going through the "school of soldier" just to make sure he was battle ready.  From what people around him told me he did great.  This was extra special because Franklin is the last major 150th event the 9th participates in the western theater (we will be going to Bentonville, NC in March). 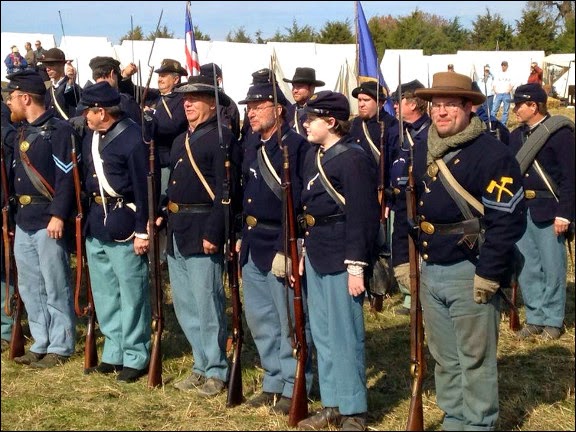 Malc in line for inspection before heading out to the field of battle.  Unfortunately I was at the other end of the line, so I didn't get to watch Malc's encounter with "the elephant."  *The above photo is from the 9th Ky webpage. 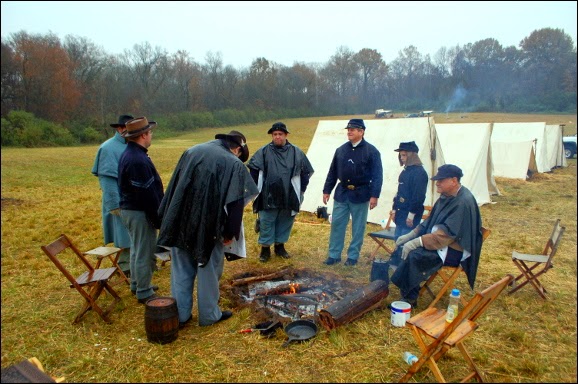 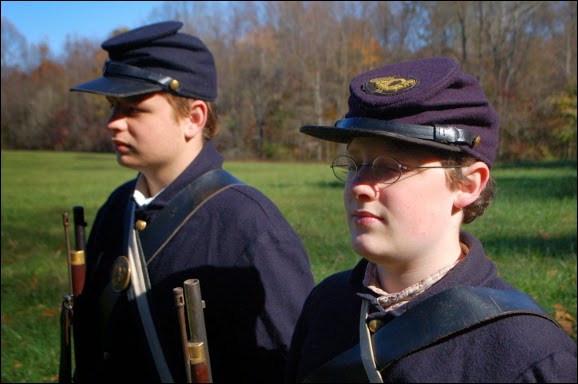 Today we said auf wiedersehen to our German friend Mick.  The group of exchange students left bright and early for Atlanta and from there they were to travel home to Germany.  While he was only here about two or so weeks, it certainly was action packed. 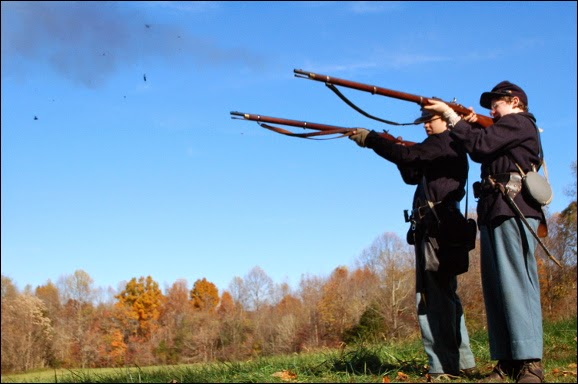 Some of the places he visited here with the Fife clan or with his group included: Mammoth Cave, the Evansville Museum of Arts, History and Science, Lincoln's Birthplace and Boyhood Home, the Bardstown Civil War Museum, Old Talbott Tavern, the Louisville Slugger Museum, the Kentucky Derby Museum, the Corvette Plant, CNN, Martin Luther King Jr National Historic Site, the World of Coca-Cola, and Mane and Pa's in Capitol Hill, Ky. 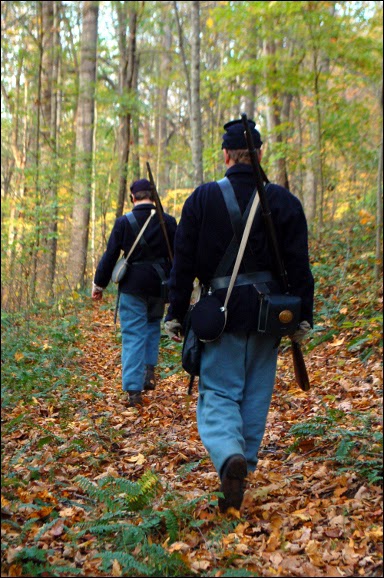 While at Mane and Pa's we had Mick "cooter up" in full uniform and go through some basic drills and such. 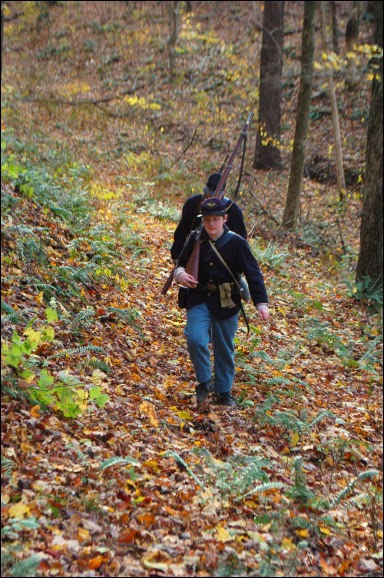 I think he really enjoyed it, as you might can guess Germany is a tad bit more strict with their gun laws. 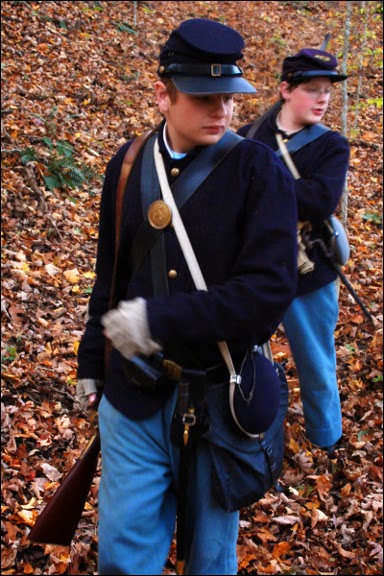 This was the first time Mick held a gun, let alone fire one (albeit just powder). 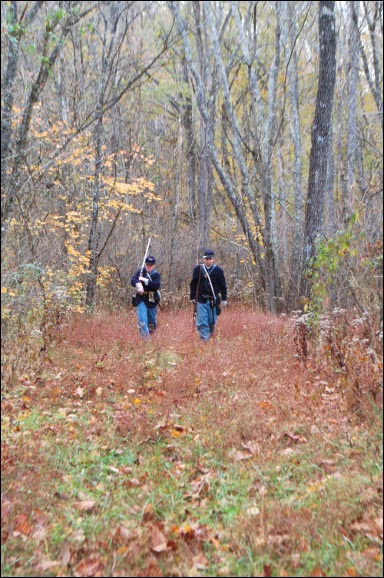 I also want to share with you a couple of our favorite questions that were posed to Mick while he visited Malcolm's school (now remember, these kids are in high school).  One asked him if Germany was a part of the United States, and another asked him if they drove here or flew. 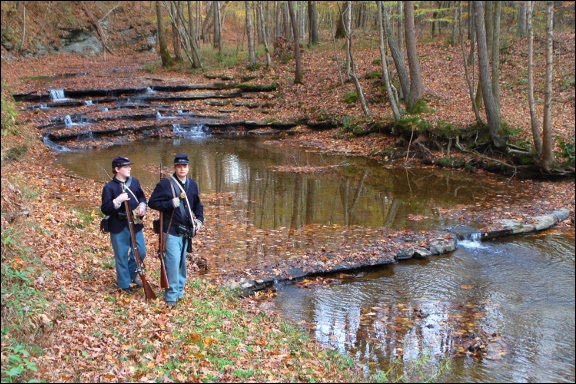 Mick was telling Malc about the nearby Roman ruins and the abundance of half-timbered buildings in his region of Germany . . . as if he needed any other incentives to want to travel to Europe! 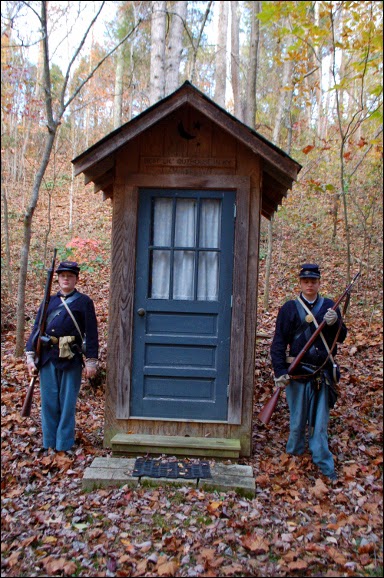 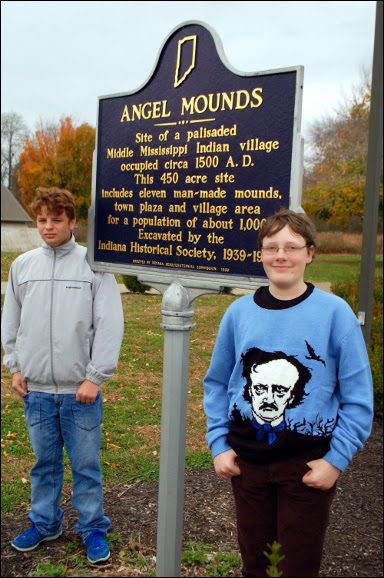 We went to Evansville specifically to visit Angel Mounds, but it was closed . . . I assume because it was election day.  It would have been nice if that had posted that on the webpage!
Posted by Merkin J. Pus-Tart at 6:12 PM 1 comment: 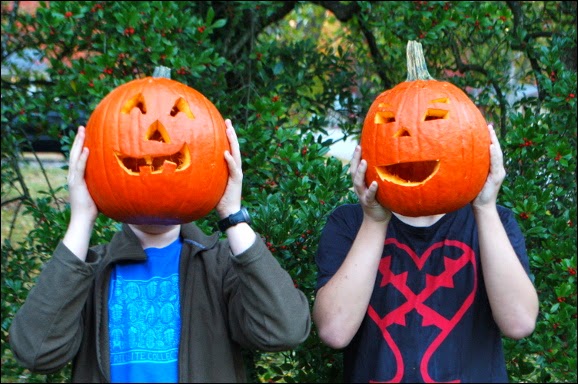 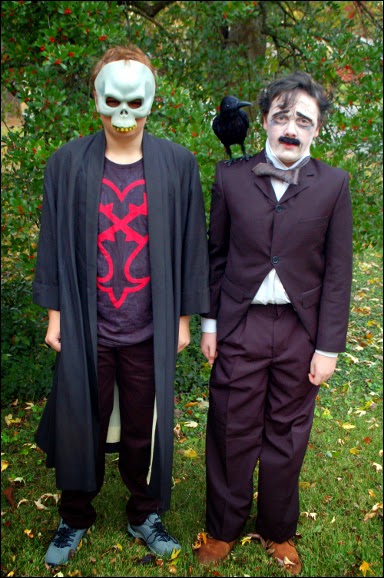 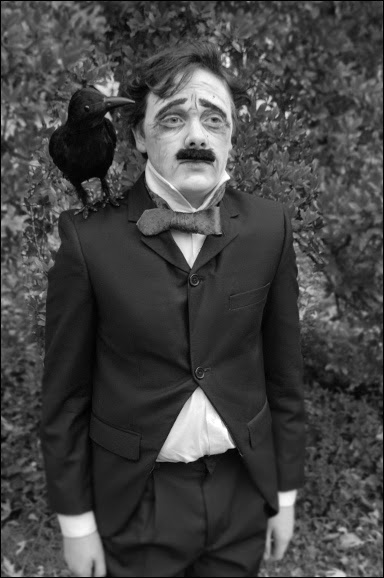 Email ThisBlogThis!Share to TwitterShare to FacebookShare to Pinterest
Labels: Miscellaneous

This past weekend, Dudeboy, Dr. J and I joined the 9th Ky for a living history encampment (read "drilling") at the Oaklands Mansion in Murfreesboro, Tn.  We had, for once, absolutely beautiful weather the whole weekend. 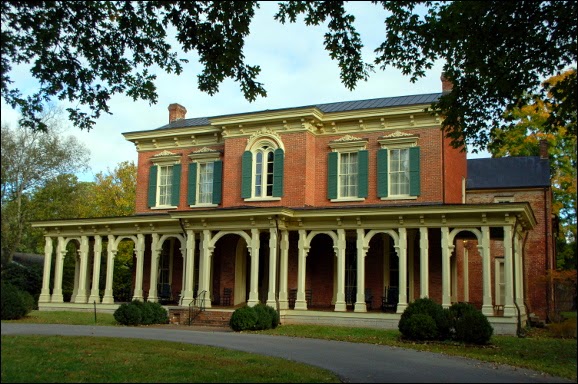 There is quite a bit of history that pertains to the house . . . during the war C.S.A. President Jeff Davis stayed at the home in 1862, and in that same year Nathan Bedford Forrest defeated Thomas Crittenden in the First Battle of Mufreesboro with much of that battle taking place near here, and "it was here on July 13, 1862, that Nathan B. Forrest received the surrender of Federal forces occupying Murfreesboro."  Another nearby marker states, "July 13, 1862- Surrender of the Union garrison took place about 4:00 P.M. Units surrendered were Brig. Gen. T. T. Crittenden and staff, detachment of the 7th Pennsylvania Cavalry, detachment of the 8th Kentucky Cavalry, "B" Battery, Kentucky Light Artillery, the 9th Michigan Infantry and the 3rd Minnesota Infantry. Stores valued at $500,000, four field-pieces, 60 wagons, 300 mules and 175 horses were taken. The entire Union force of about 1200 lost 19 killed and 120 wounded. Confederate losses were 30 killed and 60 wounded. The Confederates withdrew to Readyville, thence to McMinnville after tearing up the railroad and destroying bridges." 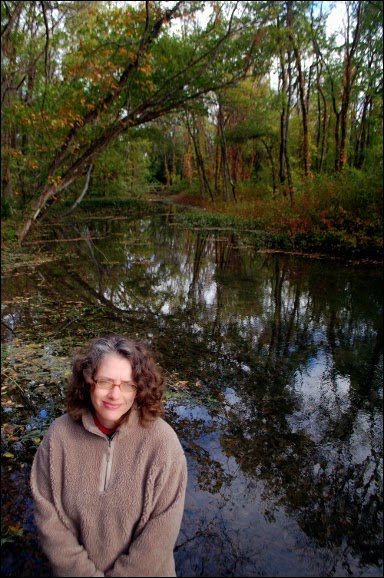 Dr. J at the spring below the house. 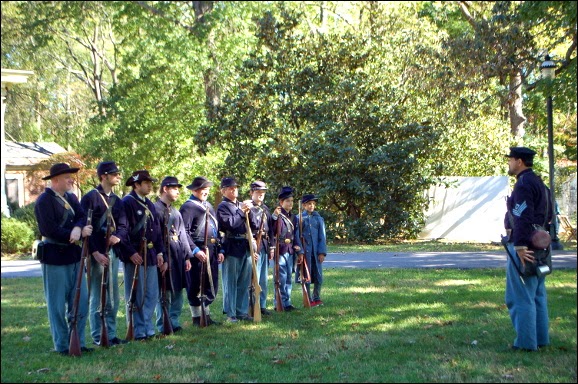 Working on the basics. 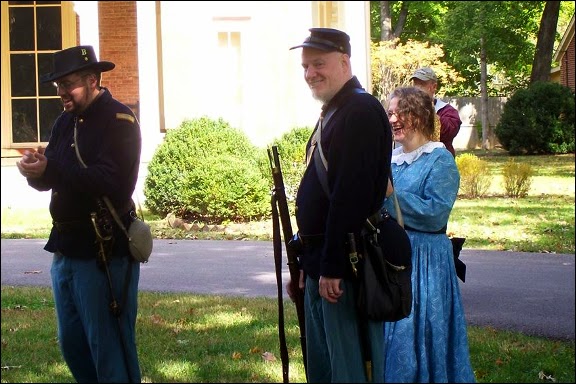 The bastards made me a corporal!  How lowly the 9th must be . . .
*the above photo was taken by cousin JoAnne
Posted by Merkin J. Pus-Tart at 9:50 PM 2 comments:

The Fife clan converged on Louisville for our first mega (to be annual) Fish Fulfilled weekend.  The goal being eating as much fish as we can in one weekend.  This year we hit Check's Cafe in the Germantown - Schnitzelburg neighborhood, Suburban Fish Fry in the south-end near the racetrack, Mike Linnig's on the river, and PassTime Fish House in J-Town.  Our numbers were pretty good, and I daresay fun was had by all (I certainly drank a fair amount of Falls City).  The representatives of the Fife clan included Todd, Malcolm, Vic, Phyllis and Charlie, Tracy, Scott and Ann, and Noni.  Our auxiliary group consisted of Greg "Studs" N., William and Lynn, Thing 1 and Thing 2, Pip Monster, Action Jackson, Greg G., Wayne and Ann, Denise, Brent, Marilyn and Bill.  Discussions of where to go next year have already transpired.  In honor of our youth, I suggested at some point we eat King Fish in our cars. 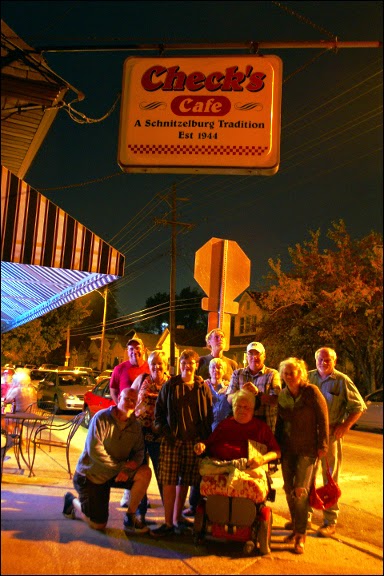 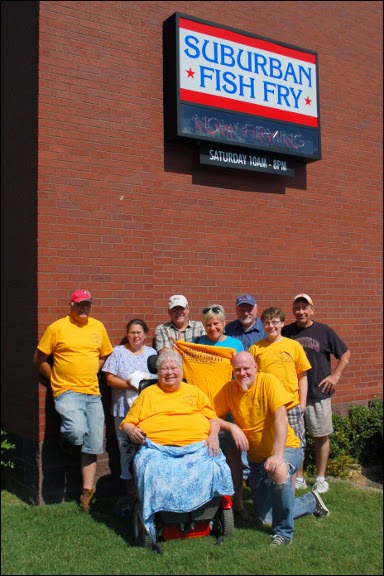 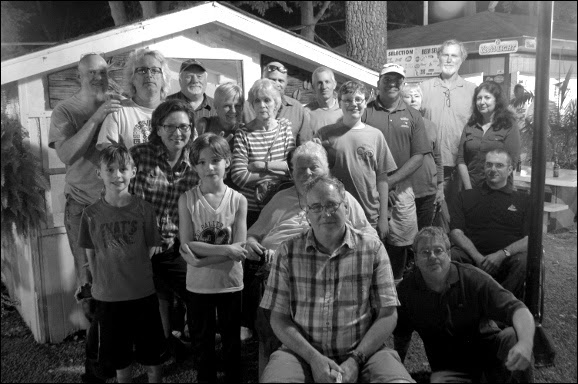 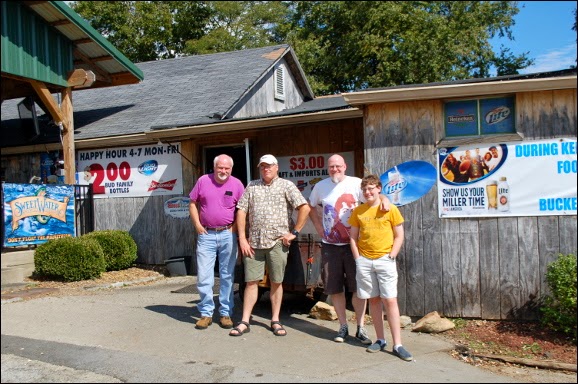 A Day in the Life of the 9th Ky 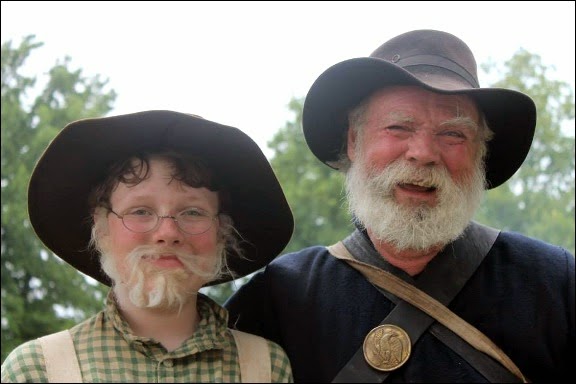 This weekend Dudeboy and I joined the rest of the 9th Ky for a special event where one could "Experience the daily life of a soldier, and the parallel life of their loved ones at home as the men of the Ninth Kentucky keep to the schedule in General Orders No. 8 from the papers of their very own Marcus Woodcock."  Which meant reveille was at 5am and then we drilled and drilled some more . . . a typical day in the life of the 9th Ky.  Below is a copy of the actual schedule written out by Woodcock. 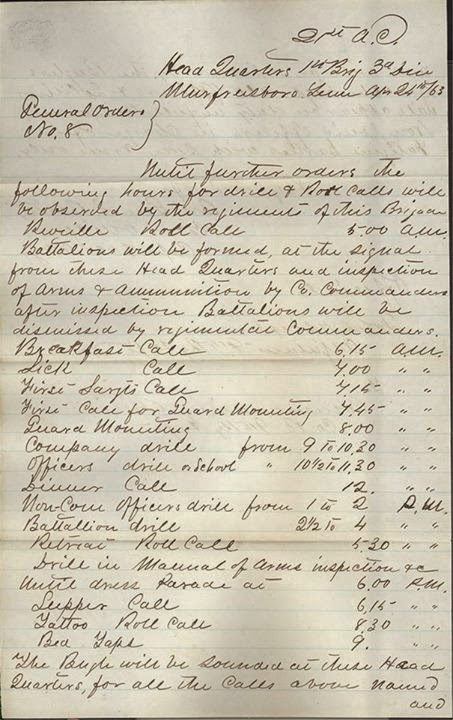